Wyoming has no laws prohibiting or authorizing open carry. When no law prohibits something, that thing is legal to do.

"Liberty" means liberty to do anything not unlawful. The liberty envisioned by [Article 1, Sec. 6, Wy. Constitution] is not alone a liberty of person such as is offended by enslavement, imprisonment or other restraint. It contemplates a person's liberty to do all that is not made unlawful. Bulova Watch Co. v. Zale Jewelry Co.

What is open carry?
There are no state laws defining open carry or concealed carry. Most states consider an openly carried firearm to be one that is plainly discernible as a firearm. In other words, if you can see it and tell that it's a gun, it's open carry.

Is open carry brandishing?
No. Brandishing involves pointing a firearm at someone. Aggravated assault is threatening to use a drawn deadly weapon on another unless reasonably necessary in defense of his person, property or abode or to prevent serious bodily injury to another, 6-2-502(iii). ​6-2-504(b)  Reckless endangering is defined as:

Any person who knowingly points a firearm at or in the direction of another, whether or not the person believes the firearm is loaded, is guilty of reckless endangering unless reasonably necessary in defense of his person, property or abode or to prevent serious bodily injury to another...

[Aggravated assault] requires proof of an actual threat of physical injury during the act of employing a deadly weapon. It was error for the trial judge to insinuate that factual circumstances would govern in determining if the (mere) presence of a weapon in hand could constitute a threat to use. It cannot. Johnston v. State

Proof of the mere presence of a weapon is insufficient to satisfy the "threatens to use" element of aggravated assault and battery; instead, that element requires proof of an actual threat of physical injury while employing the deadly weapon. Gunderson v. State

Can I open carry a rifle or a shotgun?
Wyoming has no laws on carrying openly a long gun (rifle or shotgun). Please use discretion when doing so; while it is your right to carry a long gun in public, it does tend to alarm the public, even in gun-friendly communities and could be criminal, depending on your behavior (see above). Pistols have been a normal part of daily self-protection throughout the United States since its inception and are intended for such daily carry purposes. Please don't open carry long guns just to make a point; Wyoming allows you to openly carry handguns. Save openly carried long guns for dire circumstances when they're needed, such as a riot or a major disaster. Still, it's your right, so if you chose to openly carry a long gun, please exercise your right wisely.

State Capitol WAC 006-041-006 (Sec. 2)
No dangerous weapon may be carried in the State Capitol building or in any capitol complex buildings. Police are authorized to request that any persons carrying a dangerous weapon in any state building relinquish and check the weapon. If a person carrying a dangerous weapon refuses to relinquish the weapon, they will be denied access to the capitol.​
Aside from the above, Wyoming has no other laws prohibiting where firearms cannot be carried openly, including airports, schools, and colleges, (6-5-209). Open carry is not regulated except at the state capitol, courtrooms, mental health and correctional institutions, schools, universities, and government employers may regulate their employees and students behavior under threat of discipline or termination/expulsion. There is no law prohibiting open carry by parents/adults at a school or by non-students on a college/university campus. Use caution, however, as you may be harassed by staff and law enforcement. ​

Caution: 6-6-303 Refusing to desist or remove oneself from government facilities

​"Printing," where the imprint of your gun shows through your clothing, is not illegal anywhere in the United States.

Wyoming is a shall-issue state and anyone under 18 may be issued a permit. Wyoming does not issue non-resident permits to non-residents. Permits are only for travel to other states in light of permitless carry. You must be a state resident for six months before applying. Concealed firearm permits are issued by the attorney general (Dept. of Criminal Investigation, DCI) and valid for 5 years. Applications are submitted through the county sheriff where the resident resides. Fees are $50.00 for new and renewed permits plus fingerprint fees. Permit information is confidential not public record. You may renew before expiration and up to six months after expiration (with a late fee). DCI has 60 days to issue or deny. 30 days to appeal a denial and DCI has 20 days to respond. ​

​It shall be presumed that an applicant chronically and habitually uses alcoholic beverages to the extent that his normal faculties are impaired if the applicant has been involuntarily committed, within the one year period prior to the date on which application for a permit under this section is submitted, to any residential facility pursuant to the laws of this state or similar laws of any other state as a result of the use of alcohol. (6-8-4-104(b)(vi)

Non-resident military service-members in Wyoming should contact the DCI after July 1, 2016 for rules on issuance to them.

Any one of the following activities listed in this paragraph shall be sufficient to demonstrate familiarity with a firearm:
Proof of training will generally be in the form of a Hunter Safety Card, your DD-214 form (discharge papers), NRA handgun or licensed concealed carry training certificate.

Your permit will be revoked if:
The department has 60 days to issue or deny the permit application. You have 30 days to submit an appeal of denial, which the department must respond to within 20 days. After that, you may appeal to district court.

If you have been denied a Wyoming permit, you may not carry a concealed firearm under a permit issued in another state, so long as you remain a resident of Wyoming and you remain ineligible for a permit in Wyoming.

You have 30 days to notify the department of change of address or a lost or destroyed permit. The duplicate fee is $5.00.

You may renew your permit on or before the expiration date. You must submit:
Permits may be renewed up to six months after expiration and you must pay a $10.00 late renewal fee. After six months, you must apply anew.

This does not apply to open carry. Concealed carry is heavily regulated. This may be regarded as a fortunate oversight by the legislature or a recognition that openly carrying firearms is constitutionally protected. Whatever the case, citizens and authorities are more sensitive to open carry, and in light of a lack of laws or court cases documenting an affirmative right to openly carry at the above locations, caution is advised.

The permittee shall carry the permit, together with valid identification at all times when the permittee is carrying a concealed firearm and shall display both the permit and proper identification upon request of any peace officer, 6-8-104(b).
Concealed Firearm Permit Reciprocity
Wyoming does not issue non-resident permits. Wyoming recognizes all permits from all states that recognize Wyoming's permit and when the out-of-state permit is valid across the issuing state, 6-8-104(iii). 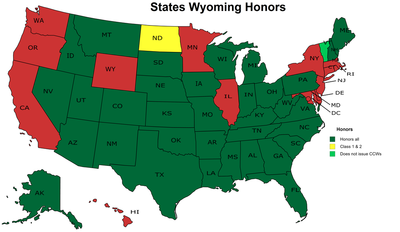 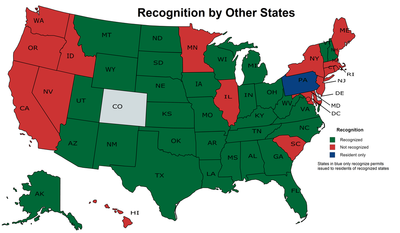 Open carry is not suicidal; attacks debunked
Concealed carry is better than open carry because surprise will work to my advantage.
The idea behind this is that an openly carried weapon may make the carrier a primary target of the criminal/terrorist. The concealed carrier would blend in with the crowd, and then draw at when it was to their advantage.

Open carry and concealed carry each have their own unique advantages and disadvantages; neither is inherently superior to the other. Both methods complement each other and allow for flexibility in self-defense.
This does not constitute, nor should be implied as, legal advice. Always seek an attorney's advice and consult state and local laws yourself. User assumes all liability for use of the information provided here. Copyright 2022. Updated 6/2022.