Open carry without a license, except in a vehicle, is legal. You must be 21 to possess a pistol in a public place. Adults 18 to 20 may possess a pistol at their residence, business, or property, 9.41.240.
What is open carry?
There are no state laws defining open carry or concealed carry. Most states consider an openly carried firearm to be one that is plainly discernible as a firearm. In other words, if you can see it and tell that it's a gun, it's open carry.

Is open carry brandishing?
Brandishing is aiming as firearm, whether loaded or not, at or towards any human being, 9.41.230. It is illegal to carry, exhibit, display, or draw a firearm in a manner, under circumstances, and at a time and place that either manifests an intent to intimidate another or that warrants alarm for the safety of other persons, 9.41.270. The latter section is entirely dependent on your conduct while carrying. However, it is important to note it was drafted in the late '60s as a response to an armed protest by the Black Panthers at the state capitol and a provision prohibiting carry within 500ft of a public building was removed.

Can I open carry a rifle or a shotgun?
Washington has no laws on carrying openly a long gun (rifle or shotgun). Please use discretion when doing so; while it is your right to carry a long gun in public, it does tend to alarm the public, even in gun-friendly communities and could be criminal, depending on your behavior (see above). Pistols have been a normal part of daily self-protection throughout the United States since its inception and are intended for such daily carry purposes. Please don't open carry long guns just to make a point, such as in the state capitol; Washington allows you to openly carry handguns. Save openly carried long guns for dire circumstances when they're needed, such as a riot or a major disaster. Still, it's your right, so if you chose to openly carry a long gun, please exercise your right wisely.
OPEN CARRY AT/NEAR PROTESTS PROHIBITED: Open carry is banned at permitted protests or within 250 feet. Concealed carry is not. See bill text here.

(i) "Permitted demonstration" means either: (A) A gathering for which a permit has been issued by a federal agency, state agency, or local government; or (B) A gathering of 15 or more people who are assembled for a single event at a public place that has been declared as permitted by the chief executive, sheriff, or chief of police of a local government in which the gathering occurs. A "gathering" means a demonstration, march, rally, vigil, sit-in, protest, picketing, or similar public assembly.

(ii) "Public place" means any site accessible to the general public for business, entertainment, or another lawful purpose. A "public place" includes, but is not limited to, the front, immediate area, or parking lot of any store, shop, restaurant, tavern, shopping center, or other place of business; any public building, its grounds, or surrounding area; or any public parking lot, street, right-of-way, sidewalk, public park, or other public grounds.
​
(iii) "Weapon" has the same meaning given in subsection (1)(b) of this section. (e) Nothing in this subsection applies to the lawful concealed carry of a firearm by a person who has a valid concealed pistol license.

Except in the person's place of abode or fixed place of business, a person shall not carry a pistol concealed on his or her person without a license to carry a concealed pistol, 9.41.050. ​"Printing," where the imprint of your gun shows through your clothing, is not illegal anywhere in the United States.
General Exemptions
The following may carry a concealed firearm, when (9.41.060):

Basics 9.14.070
Concealed weapon permits are issued on a shall-issue basis by local police or county sheriffs. Permits must be issued or denied within 30 days of application for Washington residents and 60 days for non-residents. New residents are not considered residents for this purpose during their first 90 days in-state. Permits are valid for five years. Temporary licenses may be issued with good cause. No training is required. The fee is $36 plus individual agency fingerprint fees (fee schedule).

You must be at least 21 to apply. Your application will be denied if:
​The issuing authority shall deny a permit to anyone who is found to be prohibited from possessing a firearm under federal or state law.

The issuing authority shall conduct a check through the national instant criminal background check system, the Washington state patrol electronic database, the department of social and health services electronic database, and with other agencies or resources as appropriate, to determine whether the applicant is ineligible under state law to possess a firearm, or is prohibited from possessing a firearm under federal law, and therefore ineligible for a concealed pistol license.

A renewal application may be submitted 90 days before or after the expiration date of the license. Renewal fees are $32. The late/replacement fee is an additional $10 ($42). Deployed servicemembers have 90 days to renew after returning to Washington.​​ 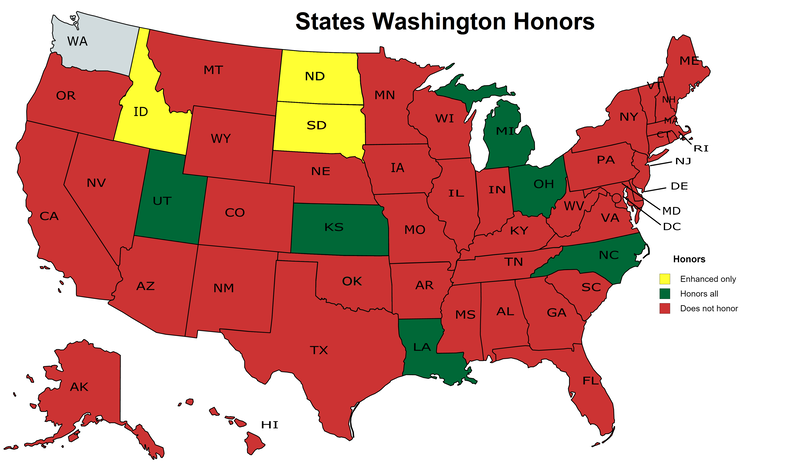 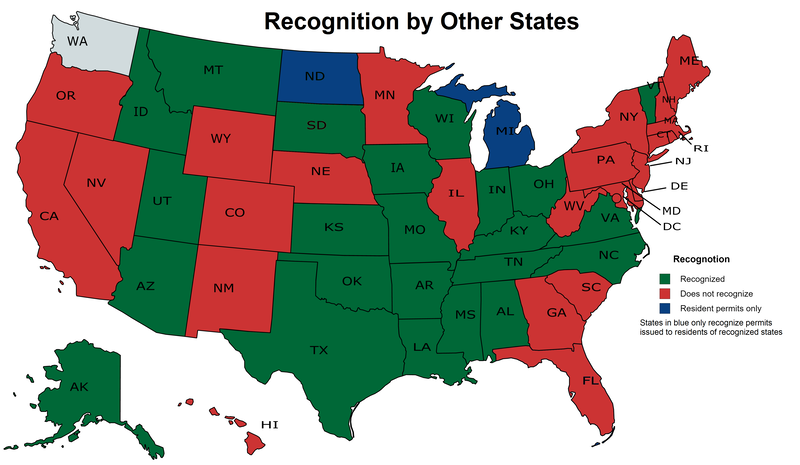 ​Washington State makes it a felony for non-US citizens to carry or possess any firearm, unless the person (9.41.171):Self-defense carry for non-resident aliens is illegal.

Fees are at least $50 plus additional charges imposed by the Washington State Patrol and FBI. Licenses are valid for two years.

Non-Canadian
A nonimmigrant alien, who is not a resident of Washington or a citizen of Canada, may carry or possess any firearm without having first obtained an alien firearm license if the nonimmigrant alien possesses:
Canadian exemptions
A citizen of Canada may carry or possess any firearm so long as he or she possesses:
​Firearms may only be possessed for the purpose of using them in the hunting of game while such persons are in the act of hunting, or while on a hunting trip, or while such persons are competing in a bona fide trap or skeet shoot or any other organized contest where rifles, pistols, or shotguns are used. Nothing in this section shall be construed to allow aliens to hunt or fish in this state without first having obtained a regular hunting or fishing license.
Open carry is not suicidal; attacks debunked
Concealed carry is better than open carry because surprise will work to my advantage.
The idea behind this is that an openly carried weapon may make the carrier a primary target of the criminal/terrorist. The concealed carrier would blend in with the crowd, and then draw at when it was to their advantage.

Open carry and concealed carry each have their own unique advantages and disadvantages; neither is inherently superior to the other. Both methods complement each other and allow for flexibility in self-defense.
This does not constitute, nor should be implied as, legal advice. Always seek an attorney's advice and consult state and local laws yourself. User assumes all liability for use of the information provided here. Copyright 2021. Info current as of Nov. 2021.