"Concealed firearm" means a firearm that is:
(i) covered, hidden, or secreted in a manner that the public would not be aware of its presence; and
(ii) readily accessible for immediate use.
(b) A firearm that is unloaded and securely encased is not a concealed firearm for the purposes of this part. 76-10-501(3)

﻿Carrying a concealed firearm requires no longer requires a permit (as of May 2021 with constitutional carry). Carrying a concealed, unloaded firearm is a class B misdemeanor, whereas if the firearm is loaded, it is a class A misdemeanor. Carrying an illegal short-barreled shotgun or rifle or carrying a concealed firearm in the commission of a violent felony is a second degree felony. With constitutional carry, this really only applies to persons who cannot legally possess firearms. The exemptions are (76-10-504):
Domestic violence exemption: per 76-10-523(2)(b) amended by HB 243 (2019) persons who have been issued a domestic violence protection order may carry concealed without a permit for up to 120 days from the date of issuance of the order.
Concealed firearm act (53-5-7)
"Printing," where the imprint of your gun shows through your clothing, is not illegal anywhere in the United States.

Permits will still be issued, which allow the exemption from having background checks called in by gun stores (known as the Permanent Brady Chart), although the Form 4473 is still filled out, and allows reciprocity in a wide number of states that still require permits.

The Bureau of Criminal Identification (BCI), a state agency, is responsible for issuing permits. The Bureau shall issue a permit to carry a concealed firearm for lawful self defense to an applicant who is 21 years of age or older within 60 days after receiving an application, unless the bureau finds proof that the applicant does not meet the qualifications. A regular permit is valid for five years. 53-5-704

Provisional Permits (18-20)
If you are 18-20, you may obtain a provisional concealed firearm permit. 53-5-704.5/HB198 (2017). You do not need to be Utah resident to obtain a provisional permit, however the same requirements for holding an in-state permit, if your home state recognizes Utah's permit, applies (see below). Nevada will recognize this permit. Provisional permittees 18-20 may not carry in a public or private elementary or secondary school or on the grounds (53-5-710), but this does not apply to colleges (see 76-10-505). Persons turning 21 may apply for a full permit 90 days before their 21st birthday (​HB 216; 2021).

Permittees information are not public records subject to public inspection. 53-5-708

A concealed firearm permittee is exempt from firearm background checks and fees. 76-10-526

The bureau may deny, suspend, or revoke a concealed firearm permit if the applicant or permit holder (53-5-704):
Moral turpitude includes, but is not limited to: UAC R722-300-3​

The bureau can find mitigating circumstances and issue a permit if the applicant was not convicted of a registerable sex offense and the following time periods have elapsed from the date the applicant was convicted or released from incarceration, parole, or probation, whichever occurred last: UAC R722-300-4

Non-resident applicants
A non-resident applicant whose state recognizes the Utah permit shall: In other words, unless your state does not recognize Utah's permit, you must hold a concealed firearm permit in your state before applying in Utah (see map). This is an effort to avoid duplication, since Utah recognizes all US permits, and to ensure the permittee meets the qualifications in their own state. This does not apply to an active duty service member who has been ordered to Utah or their spouse. 53-5-704

Firearm familiarity training must include: Training can be through a national, state, or local firearms training organization approved by the bureau, a certified instructor, or equivalent experience through participation in an organized shooting competition, law enforcement, or military service. 53-5-704 and UAC R722-300-5

The bureau has 60 days to issue or deny a permit. In the event of a denial, suspension, or revocation of a permit, the applicant or permit holder may file a petition for review with the board within 60 days from the date the denial, suspension, or revocation is received by the applicant or permit holder by certified mail. The board has 30 days to issue its final decision, which can be appealed for judicial review if petitioned for within 30 days. 53-5-704 and UAC R722-300-10

The bureau may issue a temporary concealed firearm permit to an applicant for a permanent permit when one requests a temporary permit and demonstrates extenuating circumstances that would justify issuing a temporary permit. Preliminary record checks are still made. Temporary permits are valid for a maximum of 90 days. 53-5-705

Forms and applications are available at the BCI pages

Can I carry a concealed handgun in a car without a permit?
Yes. 76-10-504 and 76-10-505 do not not prohibit a person from carrying a concealed firearm, a loaded handgun or any unloaded firearm (including unloaded rifles and shotguns), in a vehicle in the person's lawful possession or with the consent of the individual who is lawfully in possession of the vehicle. The firearm may be concealed on your person. The 76-10-504 exemption to the permit requirement applies only to "in or on a place other" than the vehicles mentioned above, in addition to a person's residence, business, or private property.

If the police detain me, do I have to tell them I have a gun?
Utah has no law requiring permittees volunteer to an officer that they have a firearm in the vehicle. The Utah BCI recommends (oriented to concealed firearm permittees):

​Although there is no legal requirement to identify yourself to a law enforcement officer, it is recommended to do so.
If an officer finds or sees a gun on your person during their contact with you, and you have not identified yourself as a permit holder in legal possession of a firearm, the officer may assume you are carrying the gun illegally and may take defensive action. For the safety of all involved, it is recommended to immediately identify yourself to the officer as a permit holder in possession of a handgun. This action gives the officer some assurance they are most likely dealing with a law abiding citizen.

Non-residents must have a permit in their state before applying for a Utah permit unless that person's state does not recognize Utah's permit (red states). Utah recognizes all US concealed firearm permits. Nevada will no longer recognize the Utah provisional permit effective 7/01/2021. 76-10-523(2)(b) ​
BCI reciprocity page 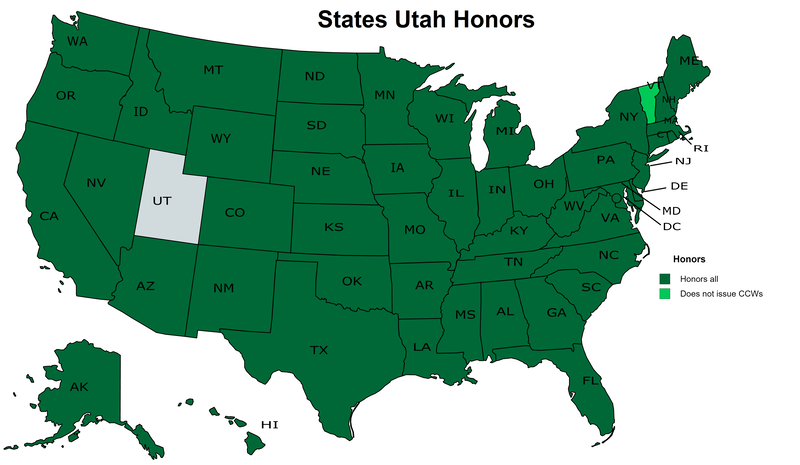 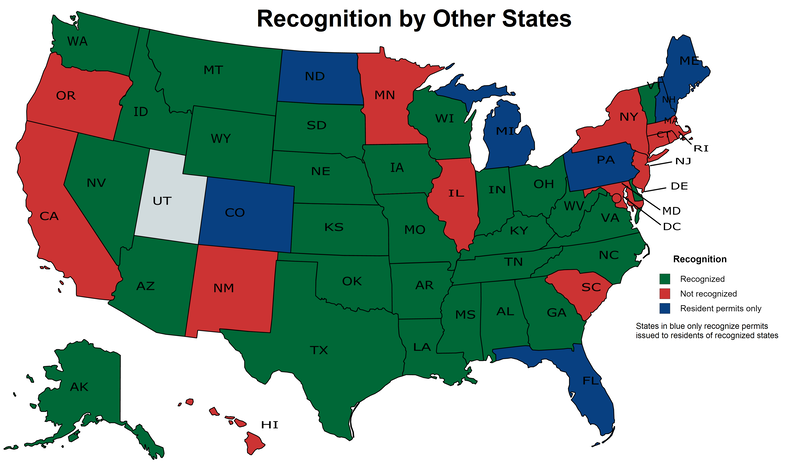 Open carry is not suicidal; attacks debunked
Concealed carry is better than open carry because surprise will work to my advantage.
The idea behind this is that an openly carried weapon may make the carrier a primary target of the criminal/terrorist. The concealed carrier would blend in with the crowd, and then draw at when it was to their advantage.

Open carry and concealed carry each have their own unique advantages and disadvantages; neither is inherently superior to the other. Both methods complement each other and allow for flexibility in self-defense.
This does not constitute, nor should be implied as, legal advice. Always seek an attorney's advice and consult state and local laws yourself. User assumes all liability for use of the information provided here. Copyright 2022. Updated 3/2022.