The open carry of firearms is not specially regulated. Anyone over the age of 18 who can legally possess a firearm can openly carry a firearm, including rifles and shotguns. Openly carried firearms do not need to be carried unloaded. All other regulations regarding possession of firearms apply. A firearm is not considered concealed when it is:

Defensive display of a firearm 13-421
The defensive display of a firearm by a person against another is justified when and to the extent a reasonable person would believe that physical force is immediately necessary to protect against the use or attempted use of unlawful physical force or deadly physical force. This includes: This does not apply to a person who: ​Can I open carry a rifle or a shotgun?
Arizona has no laws on carrying openly a long gun (rifle or shotgun). Please use discretion when doing so; while it is your right to carry a long gun in public, it does tend to alarm the public, even in gun-friendly communities. Reckless carry of a long-gun that incites panic could potentially be construed as threatening or intimidating behavior (13-1202). Pistols have been a normal part of daily self-protection throughout the United States since its inception and are intended for such daily carry purposes. Please don't carry long guns into Chipotle just to make a point. Save openly carried long guns for dire circumstances when they're needed, such as a riot or a major disaster. Still, it's your right, so if you chose to openly carry a long gun, please exercise your right wisely.

Does my gun have to be visible from three sides?
No. See 13-3102 B. 3. above. State law requires words be construed "according to the common and approved use." Concealed is defined as "not visible to sight." If a firearm is visible enough that someone is aware of the firearm's presence, it is obviously not concealed.
​
If I use an inside the waistband holster (IWB), and only the butt of my pistol is visible outside of my clothes, is that open carry?
Yes. If you can see it and tell that it’s a gun or a holster, it’s openly carried. The described method is also known as ‘Virginia Tuck’, stemming from a former Virginia law where concealed carry was illegal in bars, so patrons would tuck their shirt to expose the butt of their pistol to be considered openly carried.

Arizona does not have a law prohibiting loaded long-guns (rifles and shotguns) in a vehicle.

A person carrying a firearm concealed on their person or within his immediate control, when detained (traffic stop)  must accurately answer the officer if the officer asks whether the person is carrying a concealed deadly weapon except a firearm carried in a case, holster, scabbard, pack or luggage that is carried within a means of transportation or within a storage compartment, map pocket, trunk or glove compartment. Openly carried firearms are exempt. 13-3102 A. 1. & B. 2. (e) ​

Parking lot protection 12-781
A property owner, tenant, public or private employer or business entity cannot make rules or policies that prohibits a person from lawfully transporting or storing a firearm: Any policy or rule that is established or maintained or the attempted enforcement  is null and void and does not have legal force or effect.

Exemptions
Armed Drivers and Police
​The DMV now advises armed drivers: "...drivers with firearms in the vehicle should keep your hands on the steering wheel in a visible location and when the officer approaches let them know that you have a firearm in the vehicle and where the firearm is located. If requested, the officer may take possession of the weapon, for safety reasons, until the contact is complete." More from Dean Weingarten at Gun Watch
DMV Manual-armed drivers

All legal methods of carrying off-body in a vehicle 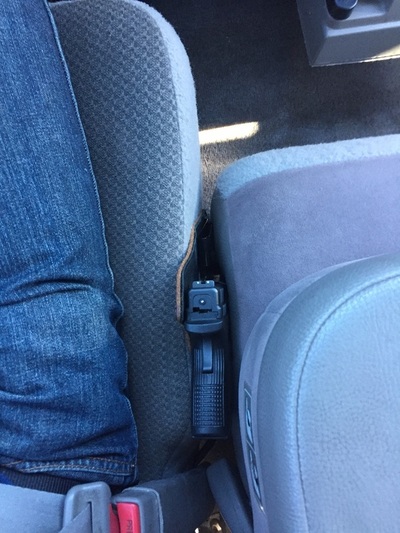 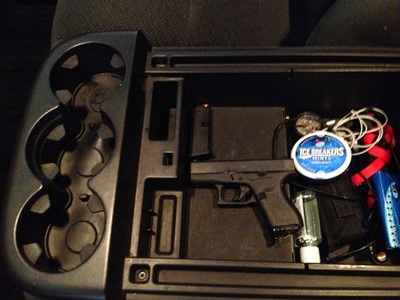 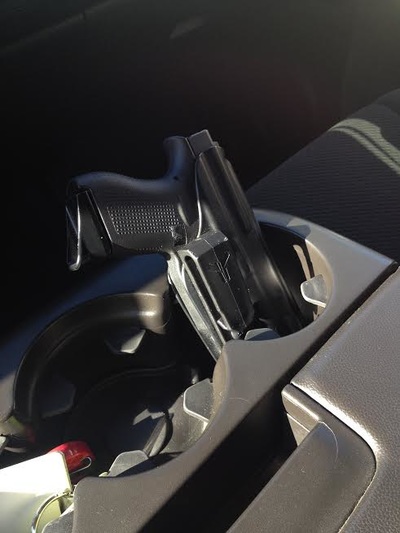 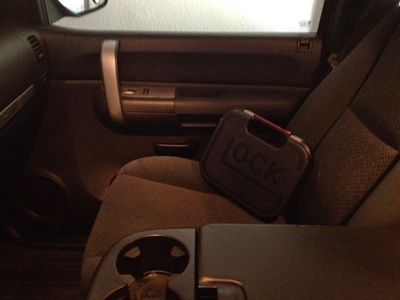 Arizona law defines two type of retailers: off-sale retailers, liquor stores/package stores where consumption on the premises is illegal, and on-sale retailers, such as bars and restaurants.

A common misconception is that it is legal for a concealed weapon permittee to carry a firearm inside an establishment that serves alcohol (bar/restaurant), as long as the firearm remains concealed and the carrier does not drink alcohol. This only applies when there is not a 'no-guns' sign posted. A 'no-guns' sign means no guns, period, permit or not. If the sign does not meet the below requirement, 4-229 is not enforceable.

Defenses to 4-229
These are not exemptions; you may still be arrested and prosecuted and argue them in court.  If you are a non-Arizona resident, you must prove that you didn't know about the law, not that you thought the law didn't apply to you.

Illegal to serve or sell alcohol to someone carrying a firearm or allow them to remain 4-244(30)
A licensee or employee cannot knowingly permit a person in possession of a firearm to remain on the licensed premises or to serve, sell or furnish spirituous liquor to a person in possession of a firearm while on the licensed premises of an on-sale retailer. It shall be a defense to action under this paragraph if the licensee or employee requested assistance of a peace officer to remove such person. Concealed weapon permittees may stay as long as there is not a 'no guns' sign posted and they do not consume alcohol.

It is illegal for any person in possession of a firearm while on the licensed premises of an on-sale retailer to consume spirituous liquor. 4-244(31)

"Spirituous liquor" includes alcohol, brandy, whiskey, rum, tequila, mescal, gin, wine, porter, ale, beer, any malt liquor or malt beverage, absinthe, a compound or mixture of any of them or of any of them with any vegetable or other substance, alcohol bitters, bitters containing alcohol, any liquid mixture or preparation, whether patented or otherwise, which produces intoxication, fruits preserved in ardent spirits, and beverages containing more than one-half of one per cent of alcohol by volume 4-101(31).
Dept. of Liquor page

Firearms are banned at K-12 schools, including school grounds. Subsection I gives very limited exemptions. 13-1302 A. (12)

There are no specific laws prohibiting firearms on college or university campuses, however, individual campuses may have their own policies regarding firearms. Students are regulated by their respective codes of conduct. Students can be disciplined and presumably, non-students in violation of campus rules may be asked to leave. AZS 12-781 allows possession of firearm in private vehicles on campus in compliance with the provisions of that section. ​

State Universities (UofA, USU, NAU)
The following regulations apply to the three state universities. Weapons include firearms, as defined by 5-308.
5-303 Prohibited Conduct
The unauthorized use, possession or storage of any weapon on the university campus or at a university-sponsored activity is prohibited, except a person may lawfully transport or lawfully store a firearm that is both:
Community Colleges
The following community colleges and districts have weapon policies that generally prohibit firearms:

Do I have to tell an officer I'm carrying concealed?
Yes, but only when asked. A person carrying a firearm concealed on their person or within his immediate control, when detained (traffic stop)  must accurately answer the officer if the officer asks whether the person is carrying a concealed deadly weapon except a firearm carried in a case, holster, scabbard, pack or luggage that is carried within a means of transportation or within a storage compartment, map pocket, trunk or glove compartment. Openly carried firearms are exempt. 13-3102 A. 1. & B. 2. (e) ​

Police must have reasonable suspicion that criminal activity is taking place before frisking for weapons (State v. Serna).

Any person making a lawful arrest may take from the person arrested all weapons which he may have about his person and shall deliver them to the magistrate before whom he is taken. 13-3895

​Possession of other weapons while hunting; violation; classification 17-305
A. The possession of legal weapons, devices, ammunition or magazines, which are not authorized to take wildlife, is not prohibited while hunting if the weapon or device is not used to take wildlife.
B. Taking wildlife by using a weapon, device, ammunition or magazine that is not authorized to take wildlife is a class 1 misdemeanor.
This does not constitute, nor should be implied as, legal advice. Always seek an attorney's advice and consult state and local laws yourself. User assumes all liability for use of the information provided here. Copyright 2022. Updated 6/2022.