A concealed firearm is not: 13-3102 B. 3.
"Printing," where the imprint of your gun shows through your clothing, is not illegal anywhere in the United States.

Constitutional carry recognizes that the right to keep and bear arms is a God-given right (that of self-defense) and that government cannot authorize it, but only regulate it or improperly prohibit it. Many citizens object to having to pay to exercise a constitutional right. A permit is does three things: 1, it tells police the permittee isn't a bad guy; 2, it allows the police to arrest bad guys carrying concealed without a permit; and 2, it allows the government to take it away if the permittee does something wrong. A permit does not magically make citizen carriers better people or better shots, nor does it stop criminals from carrying illegally.

Carrying a non-visible firearm is not going to suddenly transform a decent person into a criminal. Those who cannot legally possess a firearm, including criminals and felons, are still prohibited. The main effect of permitless concealed carry is that the general unlicensed public can conceal a firearm instead of being limited to just open carry. Women can now carry a firearm in their purse without needing a permit. The idea that one can legally openly carry a firearm, but the second a shirt or jacket covers the weapon or a woman puts it in her purse, the carrier is now a criminal, is absurd. Not requiring a permit allows many more people to carry firearms who would not openly carry otherwise.

No obstacles or delays exist for law-abiding citizens who choose to protect themselves, such as mandatory training or waiting for a permit to be approved and issued. While training and background checks are good things, they can be abused to deny or delay citizens from protecting themselves, as examples from other states have shown. The right to free speech does not require an education or permit. Training was never mandatory for mere ownership of firearms or open carry; this lack of a training requirement has not lead to widespread deaths, injuries, or crimes. Since Arizona enacted constitutional carry, the crime rate has actually fallen.

Permits are issued by the state Department of Public Safety (DPS) and are available to both residents and non-residents.

Permits are valid for five years, but deployed service members have 90 days to renew after returning home. Permittees' information is not public information. Permittees qualify for exemption from the Brady background check.

If an application is denied, DPS shall notify the applicant in writing within 15 days after completing the qualification checks and state the reasons why the application was denied. The applicant must submit additional documentation in response to a denial within 20 days; DPS then has 20 days to reconsider and reply. After a subsequent denial, an applicant may request an administrative hearing.

DPS has 15 days to notify a permittee their permit has been revoked or suspended and and shall state the reasons for the revocation or suspension.

Any of the following methods satisfy the training requirement:

​The person shall carry the permit at all times when the person is in actual possession of the concealed weapon and is required by section 4-229 or 4-244 (establishments that serve alcohol) to carry the permit (see below).

If the person is in actual possession of the concealed weapon and is required by section 4-229 or 4-244 to carry the permit, the person shall present the permit for inspection to any law enforcement officer on request. 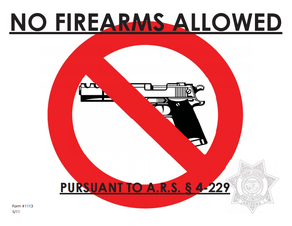 Arizona law defines two type of retailers: off-sale retailers, liquor stores/package stores where consumption on the premises is illegal, and on-sale retailers, such as bars and restaurants.

A common misconception is that it is legal for a concealed weapon permittee to carry a firearm inside an establishment that serves alcohol (bar/restaurant), as long as the firearm remains concealed and the carrier does not drink alcohol. This only applies when there is not a 'no-guns' sign posted. A 'no-guns' sign means no guns, period. If the sign does not meet the below requirement, 4-229 is not enforceable.

Illegal to serve or sell alcohol to someone carrying a firearm or allow them to remain 4-244(30)
A licensee or employee cannot knowingly permit a person in possession of a firearm to remain on the licensed premises or to serve, sell or furnish spirituous liquor to a person in possession of a firearm while on the licensed premises of an on-sale retailer. It shall be a defense to action under this paragraph if the licensee or employee requested assistance of a peace officer to remove such person. Concealed weapon permittees may stay as long as there is not a 'no guns' sign posted and they do not consume alcohol.

"Spirituous liquor" includes alcohol, brandy, whiskey, rum, tequila, mescal, gin, wine, porter, ale, beer, any malt liquor or malt beverage, absinthe, a compound or mixture of any of them or of any of them with any vegetable or other substance, alcohol bitters, bitters containing alcohol, any liquid mixture or preparation, whether patented or otherwise, which produces intoxication, fruits preserved in ardent spirits, and beverages containing more than one-half of one per cent of alcohol by volume. 4-101(31)
State ccw page

​Arizona recognizes a concealed weapon, firearm or handgun permit or license from another state if the license is valid in the issuing state, the permittee is legally present in Arizona, and the permittee is not prohibited from possessing a firearm under Arizona law.

A person with a concealed weapons permit from another state may not carry a concealed weapon in this state if the person is under twenty-one years of age or is under indictment for, or has been convicted of, a felony offense in any jurisdiction. 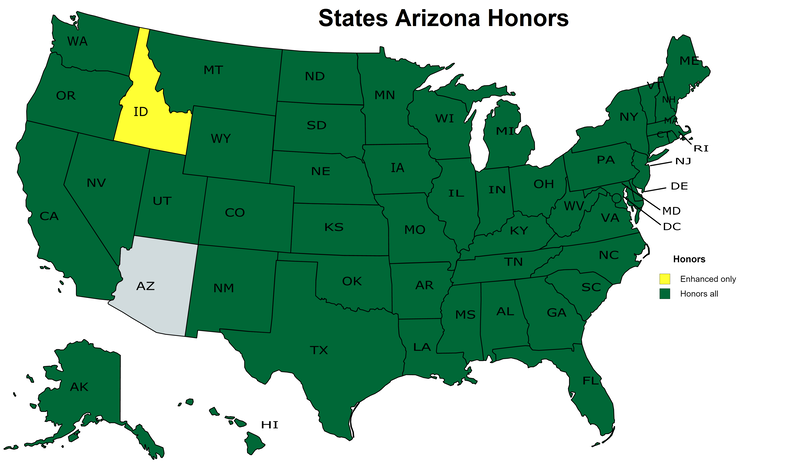 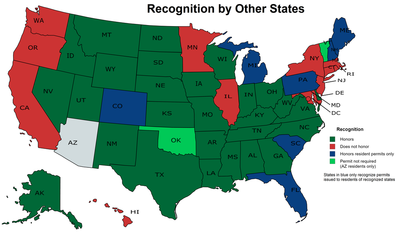 Vermont does not issue or require concealed weapon permits. Arizona only recognizes the Idaho Enhanced permit.
Concealed carry is better than open carry because surprise will work to my advantage.
The idea behind this is that an openly carried weapon may make the carrier a primary target of the criminal/terrorist. The concealed carrier would blend in with the crowd, and then draw at when it was to their advantage.

Open carry and concealed carry each have their own unique advantages and disadvantages; neither is inherently superior to the other. Both methods complement each other and allow for flexibility in self-defense.
Open carry is not suicidal; attacks debunked
This does not constitute, nor should be implied as, legal advice. Always seek an attorney's advice and consult state and local laws yourself. User assumes all liability for use of the information provided here. Copyright 2021. Info current as of 01/01/20.