"Concealed weapon" means any deadly weapon carried on or about the person in a manner not discernible by ordinary observation. 18-3302(2)(a)

"Printing," where the imprint of your gun shows through your clothing, is not illegal anywhere in the United States.
What is a loaded firearm?
For a firearm capable of using fixed ammunition, that live ammunition is present in: For a firearm that is not capable of using fixed ammunition, that the firearm contains:
Concealed carry requires a permit only within city limits. The exemptions are: Also exempt are:

Idaho residents and vistors may: ​Concealed weapon licenses are not required in Idaho for anyone after July 1, 2020, when all US citizens may carry concealed in Idaho without a permit.

Idaho is a shall issue state. Concealed weapon licenses are issued by county sheriffs. A sheriff cannot ask the applicant to voluntarily submit any information not required by law. There is no duty to inform an officer if carrying concealed, and while there is no law that requires one to present a license if asked, 18-3302(h) and (h) state the license exemption is only valid when in possession of the license. Non-residents carrying on a recognized out-of-state license/permit must be carried by the armed citizen in order for the permit/license to be valid under Idaho law. Licensee/applicant information is not public record. 74-105(6)

This is a basic license to carry a concealed firearm in Idaho authorized by by 18-3302. This does not require specialized training as most states or the enhanced license require. It is available to 18-21 year olds on a may issue basis (19), until July 1, 2016, when it becomes shall issue (see above). Sheriffs have 90 days to issue a license to a qualified applicant (7). A temporary application may be issued for as long as 90 days.
Training requirements:
Background check
Within five days, the sheriff submit  the application and fingerprints to the Idaho state police. The Idaho state police must conduct a national fingerprint-based records check, an inquiry through the NICS and a check of any applicable state database, including a check for any mental health records for conditions or commitments that would disqualify a person from possessing a firearm under state or federal law, and return the results to the sheriff within 60 days. If the applicant is not a United States citizen, an immigration alien query must also be conducted through ICE.

Cost
The cost is $20 for a new license, $15 for a renewal and an extra $10 if renewed between 91 and 180 days after expiration. Additional fees may be charged for fingerprinting, the background check, and printing, usually not to exceed at total cost of $64.

Renewal
Licenses are valid for five years and can be renewed 90 days before expiration and up to 90 days after expiration. Renewal licenses take effect on the day the previous license expires. The issuing sheriff must mail renewal notice 90 days prior to expiration.

This license and its requirements are substantially similar to the basic license above, however, it requires specialized training that includes legal principles and a live-fire requirement. 18-3302K

Idaho residents: Must have been a legal resident of Idaho for at least six consecutive months before applying.
Non-residents: Must hold a current license or permit to carry concealed firearms issued by your state of residence.
​
Training
Applicants must have completed within the last 12 months a qualifying handgun course taught by a certified instructor. The course instructor must be certified by the NRA, or by another nationally recognized organization that customarily certifies firearms instructors, as an instructor in personal protection with handguns, or by the Idaho POST council as a firearms instructor.

The course must:
Benefits
Holders of Idaho enhanced licenses gain the ability to carry on college/university campuses and increased reciprocity by other states that standard licensees do not have.
Concealed Firearm Permit Reciprocity
Idaho has both standard and enhanced permits. Resident and non-residents permits are recognized differently from state to state. Non-residents carrying on a recognized out-of-state license/permit must be carried by the armed citizen in order for the permit/license to be valid under Idaho law. 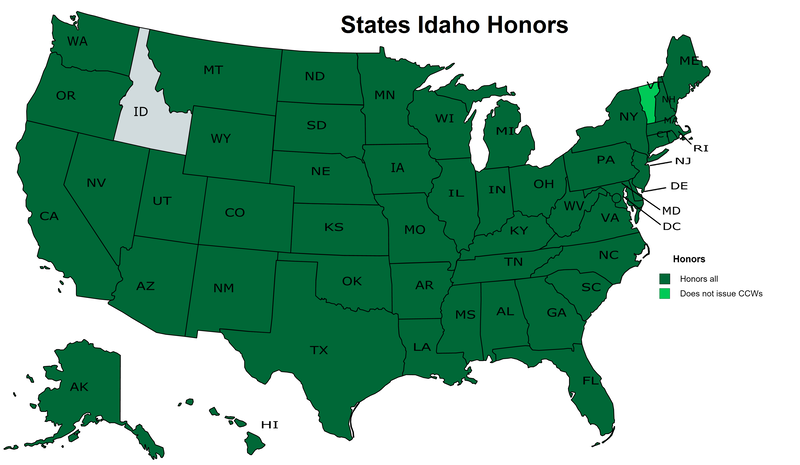 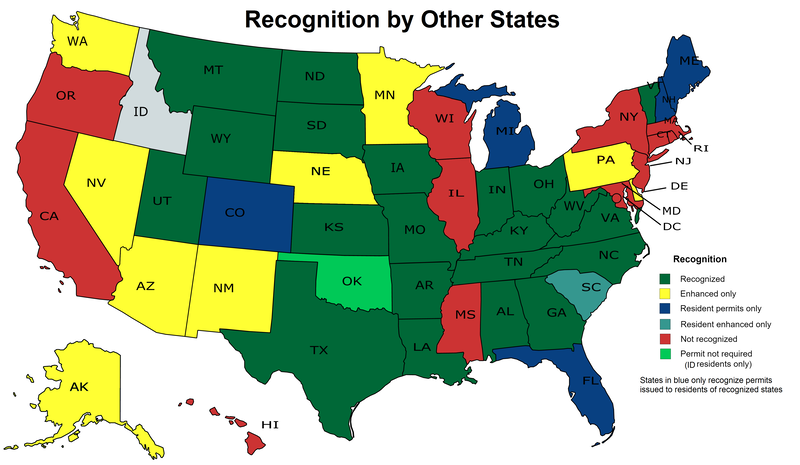 Concealed carry is better than open carry because surprise will work to my advantage.
The idea behind this is that an openly carried weapon may make the carrier a primary target of the criminal/terrorist. The concealed carrier would blend in with the crowd, and then draw at when it was to their advantage.

Open carry and concealed carry each have their own unique advantages and disadvantages; neither is inherently superior to the other. Both methods complement each other and allow for flexibility in self-defense.
Open carry is not suicidal; attacks debunked
This does not constitute, nor should be implied as, legal advice. Always seek an attorney's advice and consult state and local laws yourself. User assumes all liability for use of the information provided here. Copyright 2022. Updated 3/2022.