What does Colorado constitute as concealed?
​In people People v. Vincent (1981), it was found that the jury had to determine what was considered concealed. A reserve police officer saw the defendant with a derringer handle protruding from his pants. Later, it was found that:  "'Concealed' means placed out of sight so as not to be discernible or apparent by ordinary observation" (People ex rel. O.R, 2008). This was a juvenile case where the defendant had a handgun partially protruding from a pocket, the appeals court found the firearm was not concealed.

​Applying the plain and ordinary meaning of the statutory language here, we conclude that "concealed" for purposes of section 18-12-105(1)(b) means placed out of sight so as not to be discernible or apparent by ordinary observation. To hold that a firearm that is discernible or apparent by ordinary observation is "concealed" would lead to absurd results. For example, defining "concealed" so broadly as to subsume a partially concealed but readily observable and identifiable weapon would render it unlawful to carry a holstered handgun—no matter how brazenly displayed—if any part of the gun was concealed by the holster.

Based on People ex rel. O.R., it is reasonable that if one can identify the object as a firearm, it would likely not be concealed.

"Printing," where the imprint of your gun shows through your clothing, is not illegal anywhere in the United States.

*18-12-205(2)(a) does state that an applicant who "maintains a secondary residence or owns or leases real property used by the applicant in a business" may return their application to that sheriff.​

In order to receive a permit, you must:
Alcoholics
​The alcohol disqualification can be exempted by an applicant who provides an affidavit, signed by a professional counselor or addiction counselor who is licensed and specializes in alcohol addiction, stating that the applicant has been evaluated by the counselor and has been determined to be a recovering alcoholic who has refrained from using alcohol for at least three years.

The application must be returned in person (18-12-205). The sheriff has 90 days to issue or deny a permit. The sheriff may issue the permit if the FBI fingerprint results do not return within 90 days. 18-12-206

Temporary emergency permits
Sheriffs may issue temporary emergency permits to a person 18 and older whom the sheriff has reason to believe may be in immediate danger. This applies in the citizen's county of residence or the county where the emergency exists. A criminal history check will be performed to check that the person meets the above criteria, but no training is required. Permits are valid within 90 days, may be renewed once, but they may be renewed ad infinitum until the permittee reachers 21 if cause exists. Renewals must be requested before or after 10 days of expiration. The cost is $25. 18-12-209

Renewal
Permittees may renew a permit within 120 days of expiration. The cost is $50. The late renewal period is six months and has an additional cost of $15. 18-12-211

If the sheriff suspends or revokes a permit, the sheriff shall notify the permittee in writing, stating the grounds for suspension or revocation and informing the permittee of the right to seek a second review by the sheriff, to submit additional information for the record, and to seek judicial review pursuant to section 18-12-207.

If a sheriff denies a permit application, refuses to renew a permit, or suspends or revokes a permit, the applicant or permittee may:
As the sheriff for a second review (optional); or
Seek judicial review of the sheriff's decision. 18-12-207​
Case law: Copley v. Robinson, 224 P.3d 431 (Colo. App. 2009)

Duty to inform
The permittee shall carry the permit, together with valid photo identification, at all times during which the permittee is in actual possession of a concealed handgun and shall produce both documents upon demand by a law enforcement officer. 18-12-204

Databases and information
A sheriff may maintain a database of permittees (from his county) that is searchable by name only. A sheriff or law enforcement agency shall not share or use information from the list of permittees to create or maintain a statewide database of permittees. A peace officer may not use or search a database (no longer exists) of permittees maintained by a law enforcement agency to establish reasonable suspicion to justify probable cause for a detention or a search or seizure of a person or a person's vehicle or property. 18-12-206
Concealed carry is better than open carry because surprise will work to my advantage.
The idea behind this is that an openly carried weapon may make the carrier a primary target of the criminal/terrorist. The concealed carrier would blend in with the crowd, and then draw at when it was to their advantage.

Open carry and concealed carry each have their own unique advantages and disadvantages; neither is inherently superior to the other. Both methods complement each other and allow for flexibility in self-defense.
Open carry is not suicidal; attacks debunked
Concealed Firearm Permit Reciprocity
Colorado recognizes the permits of all states that recognize Colorado's permit as long as the citizen is 21 years old and carried both photo ID and their permit. New Colorado residents may carry on their former state's resident permit for a maximum of 90 days. 18-12-213
Colorado does not issue or honor non-resident permits. 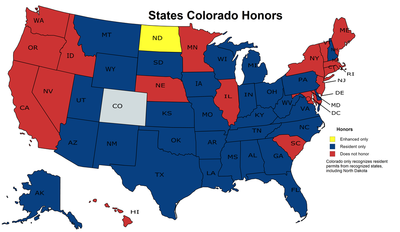 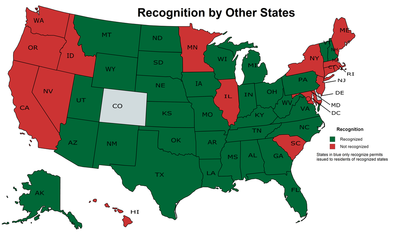 This does not constitute, nor should be implied as, legal advice. Always seek an attorney's advice and consult state and local laws yourself. User assumes all liability for use of the information provided here. Copyright 2021. Info current as of April 2021.