The right of no person to keep and bear arms in defense of his home, person and property, or in aid of the civil power when thereto legally summoned, shall be called in question; but nothing herein contained shall be construed to justify the practice of carrying concealed weapons*. State Constitution, Article II, Section 13

*Note that concealed carry is allowed via permit.

Weapon Laws (Title 18, Article 12, CRS)​
Colorado does not have purchase permits, gun registration, or gun-owner licensing. There is no waiting period mandated for firearm purchases, but private gun sales are illegal. Concealed handgun permits are shall-issue and loaded open carry is allowed (with some exceptions).

Gun control
Colorado is a universal background check state. Magazines over 15 rounds capacity ('high capacity') are regulated. Denver has regulations which are more strict than the rest of the state, including banning 'assault weapons'.

Courthouses/corrections
Some courts have taken it upon themselves to ban firearms in courthouses, regardless of other state laws. 13-10-112, see also ex. Colo. 1st Jud. Dist. LR 8. Prisons can ban firearms (17-20-124) and it is illegal to take contraband, including weapons, into a jail or prison. 18-8-203

Bar carry
You may carry a firearm in a bar or restaurant that serves alcohol. It is illegal to possess a firearm while under the influence of alcohol or a controlled substance, but there is no further definition. 18-12-106(d)

Snowmobiles
You may not hunt from a snowmobile nor have a firearm in your possession on a snowmobile unless the firearm is unloaded and in a case or carried in a scabbard. 33-14-117

School carry
It is illegal to carry a firearm on school property except that a concealed handgun permittee may have a handgun in a vehicle and, if the permittee is not in the vehicle, the handgun is in a compartment within the vehicle and the vehicle is locked (parking lot carry). 18-12-105.5 and 18-12-214

Campus carry (colleges/universities)
Firearms are not permitted at any public or private college, university, or seminary except when unloaded in a motor vehicle, in a traveler's private vehicle for lawful protection, or the handgun is concealed and carried by a concealed handgun permittee. Open carry is not permitted. 18-12-105.5

Car carry
Loaded handguns are legal ​in vehicles without a permit, including when concealed in the vehicle on on the person. Denver can prohibit open carry in vehicles. Long guns cannot have a round in the chamber. 33-6-125

Airports
Only concealed carry with a permit is allowed in the non-sterile areas of an airport (outside the TSA checkpoints). Open carry is not permitted. 18-9-118, see also 18-9-115(4)

Home carry
It is legal to carry concealed without a permit in your own dwelling, business, or on your property. This also applies to your own private automobile for self-defense while traveling. 18-12-105(2)(a)(b)

Marijuana
Marijuana is a Schedule I Controlled Substance under federal law. The ATF has found that users of marijuana are prohibited persons (see below) and may not possess firearms. Question 11.e. on the ATF Form 4473 used for firearm purchases specifically asks if buyers are marijuana users.

Firearms, loaded or unloaded, concealed or openly carried, are prohibited in the following placesFirearms are banned in "a building or part thereof owned or leased by the Federal Government, where Federal employees are regularly present for the purpose of performing their official duties" and includes essentially all parts of federal court facilities (18 USC § 930). 'No weapons' signs must be posted at federal facilities in order for someone to be convicted (but you may be arrested).

Airports/Aircraft 49 CFR 1540.111 and 49 USC § 46505
Under federal law (local laws may differ), firearms are prohibited beyond the TSA checkpoints. You also cannot attempt to enter a TSA checkpoint while armed, even by mistake. Check your bags! Even loose ammunition, empty magazines, spent cases, and miscellaneous gun parts have caused problems and prosecutions for travelers. Learn more about the TSA regulations.

Military Bases
Self-defense firearms are generally prohibited on base. Almost uniformly, civilians may not possess firearms on base. Service-members may be required to store their weapons as their commanding officer directs. Check individual base and service branch regulations. Additionally, army regulations are here and the oft-mentioned Bush-era directive is here (reaffirmed in 2011).

National Park
Section 512, Credit CARD Act of 2009 (and 54 USC § 104906) changed federal law to make park firearm regulations reflect state law. Typically, the only restrictions on firearm carry are state and local laws. If it is legal elsewhere in the state, it is legal in the park and sections that conflict with state law regarding carrying and possessing firearms (but not shooting bans) do not apply. So though on National Park Service lands (National Parks, Monuments, etc.) carrying a firearm or possessing loaded firearms are prohibited in vehicles (unless one has a special park permit, usually for hunting), this does not apply if the state allows open and/or concealed carry, or loaded/unloaded firearms in vehicles.

National Forest or Bureau of Land Management (BLM) lands in Colorado have no ban on the carry of firearms.

Indian Reservations
Firearm carry on Indian reservations is a gray area. Some reservations do permit concealed carry with a valid concealed firearm permit, however, it may vary. Tribes cannot enforce tribal law on non-tribal members, though they can enforce state and federal law. You may be trespassed from the reservation and have your firearm confiscated. One should contact individual reservation authorities for clarification of their regulations.

Denver is a special case. The following special exemptions apply and locals laws may be more restrictive than above.

​'Assault weapons' (including the modern sporting rifle and shotguns with more than six shells capacity) and magazines exceeding 21 rounds in capacity are banned (state law is 15). This does not apply to grandfathered guns with a permit or to non-residents traveling through Denver. Open carry  within Denver limits is illegal.

The City and County of Denver is a home rule city created and organized under Article XX, Section 6 of the Colorado Constitution (the “home rule amendment”). Under the home rule amendment, a home rule municipality has the supreme power to legislate in matters of local concern. Historically, Denver has had a range of ordinances controlling various aspects of the possession, use and sale of firearms in the city. (CO Denver Ruling)

​The Supreme Court's opinion allowing Denver's strict gun control regime is based on the fact it is organized differently than most cities. Under home rule, it is not subject to certain limitations that other cities are subject to. While that issue is one unique to Colorado, the arguments to support the validity of the anti-gun ordinances are specious and are a stunning abuse of logic.

Denver has banned open carry since 1973, under the premise that Denver is 'special' and somehow different than the rest of the state. Arguments seemed to be based on the fallacy that an openly carried handgun equates target shooting and that allowing open carry in the city would lead to people getting shot. The Supreme Court found that Denver has the right to regulate open carry because it is urbanized.

When it comes to assault weapons the judge literally found that 'Denver is special' and upheld the laws. " Like open carry, there is little need for statewide uniformity given the unique characteristics of Denver, and the impact of the ordinances on people living outside of Denver is minimal." In other words, Denver residents are less entitled to full Second Amendment rights than other Colorado residents.
Denver ordinances

Colorado's state preemption of local firearm laws is rather weak. As you have read above, Denver's exemptions border on ludicrous. Additionally, unlike other states, which usually reserves firearm regulation power to the legislature and grants limited authority to local governments, Colorado only prohibits local governments from making certain laws in a very narrow field. Local governments are prohibited from regulating concealed carry only. 29-11.7-101

There exists a widespread inconsistency among jurisdictions within the state with regard to firearms regulations. This inconsistency among local government laws regulating lawful firearm possession and ownership has extraterritorial impact on state citizens and the general public by subjecting them to criminal and civil penalties in some jurisdictions for conduct wholly lawful in other jurisdictions. Inconsistency among local governments of laws regulating the possession and ownership of firearms results in persons being treated differently under the law solely on the basis of where they reside, and a person's residence in a particular county or city or city and county is not a rational classification when it is the basis for denial of equal treatment under the law. This inconsistency places citizens in the position of not knowing when they may be violating the local laws and therefore being unable to avoid violating the law and becoming subject to criminal and other penalties. 29-11.7-101(d)-(g)

(1) A local government, including a law enforcement agency, shall not maintain a list or other form of record or database of:
(a) Persons who purchase or exchange firearms or who leave firearms for repair or sale on consignment;
(b) Persons who transfer firearms, unless the persons are federally licensed firearms dealers;
(c) The descriptions, including serial numbers, of firearms purchased, transferred, exchanged, or left for repair or sale on consignment.

A local government may not enact an ordinance, regulation, or other law that prohibits the sale, purchase, or possession of a firearm that a person may lawfully sell, purchase, or possess under state or federal law. Any such ordinance, regulation, or other law enacted by a local government prior to March 18, 2003, is void and unenforceable.​​

18-12-105.6 Limitation on local ordinances regarding firearms in private vehicles

Notwithstanding any other provision of law, no municipality, county, or city and county shall have the authority to enact or enforce any ordinance or resolution that would restrict a person's ability to travel with a weapon in a private automobile or other private means of conveyance for hunting or for lawful protection of a person's or another's person or property while traveling into, through, or within, a municipal, county, or city and county jurisdiction, regardless of the number of times the person stops in a jurisdiction.

Convicted felons may not possess firearms under state law. The statute provides for varying penalties depending on various circumstances. 18-12-108
Federal Prohibited Persons
The following are federally prohibited persons:

Possession by minors prohibited 18-12-108.5
It is illegal for minors under the age of 18 to knowingly possess a handgun, except a minor who is:
Unlawfully providing or permitting a juvenile to possess a handgun 18-12-108.7
No person may intentionally, knowingly, or recklessly provide a handgun to a minor under 18 (juvenile). Anyone who knows of a juvenile in illegal possession of a handgun (18-12-108.5 above) must make reasonable efforts to stop the minor or take the handgun away. No person shall sell, rent, or transfer ownership or allow unsupervised possession of a firearm by any juvenile without the consent of the juvenile's parent or legal guardian.
Concealed Firearm Permit Reciprocity 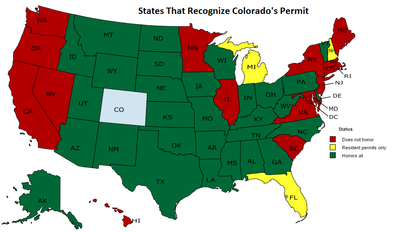 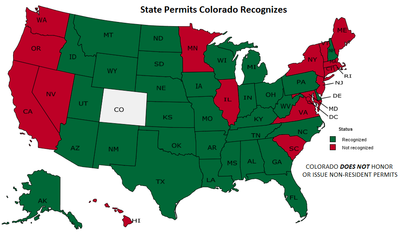 All citations Colorado Revised Statutes (CRS) unless otherwise indicated.
This does not constitute, nor should be implied as, legal advice. Always seek an attorney's advice and consult state and local laws yourself. User assumes all liability for use of the information provided here. Copyright 2021. Info current as of April 2021.