Per HB 102 (2021), a permit to carry concealed is no longer required in Montana, by residents or non-residents.

Formerly, permitless carry only applied outside of built-up areas. You could carry a concealed weapon without a permit (repealed-45-8-317): This section was repealed in February of 2021 per HB 102 as it was superfluous.

Section 4 has been added by HB 102 of 2021. The first clause seems to imply this only applies to those who have a concealed weapons permit, which is no longer required to carry concealed. An unlicensed individual might not be prohibited by law from carrying in these areas, however, enforcement and interpretation may not be to the favor of the carrier. This section is poorly written.

​Section 4. Where concealed weapon may be carried -- exceptions. A person with a current and valid permit issued pursuant to 45-8-321 or recognized pursuant to 45-8-329 may not be prohibited or restricted from exercising that permit anywhere in the state, except:
(1) in a correctional, detention, or treatment facility operated by or contracted with the department of corrections or a secure treatment facility operated by the department of public health and human services;
(2) in a detention facility or secure area of a law enforcement facility owned and operated by a city or county;
(3) at or beyond a security screening checkpoint regulated by the transportation security administration in a publicly owned, commercial airport;
(4) in a building owned and occupied by the United States;
(5) on a military reservation owned and managed by the United States;
(6) on private property where the owner of the property or the person who possesses or is in control of the property, including a tenant or lessee of the property, expressly prohibits firearms;
(7) within a courtroom or an area of a courthouse in use by court personnel pursuant to an order of a justice of the peace or judge; or
(8) in a school building as determined by a school board pursuant to 45-8-361.

No guns signs
No guns signs do not have the force of law on private property. Failure to leave or disarm would only be trespassing. New language in HB 102 (2021) allows restricting the ability to carry on private property where the owner forbids it, but makes no mention of signage. You must be asked to leave or disarm; signs alone do not have the force of law. Note: The ambiguity presents a legal question that has not been settled, however, the current common understanding is that the "forbidding" refers to verbal notification and not signage. Hotel owners and landlords are prohibited by law from banning firearms, 70-24-110.
Private Property
"On private property where the owner of the property or the person who possesses or is in control of the property, including a tenant or lessee of the property, expressly prohibits firearms" raises questions about signage that we don't have an answer to. At this time, we would advise anyone who is asked​ to leave a business do so, or they will face trespassing charges.
College/Universities
On campus, campus authorities may restrict firearms. The provisions of HB102 that prevented this were deemed unconstitutional.
Repealed gun free zones
HB 102 repealed the old restrictions on concealed carry in banks and bars or restaurants.

​County sheriffs must issue permits within 60 days after receiving and application. Applicants must be a US citizen, 18 or older, who holds a valid Montana driver's license or state photo ID, and has been a Montana resident for at least 6 months. Non-residents will not be issued a permit. 45-8-321

Proof of the following training is required to be submitted with an application for a permit:Sheriff's may also, with the applicant's consent, require a physical test of firearm familiarity in lieu of a training course.

​Fees are $50 for initial permits. Fingerprint cost is $5 and are not required for renewals. Renewals are good for four years and cost $25. Renewals may be made within 90 days prior to the permit's expiration. Additional information may not be requested by a sheriff. Applications are considered confidential and not public records.

Denials must be issued within 60 days after an application is received, 45-8-323. The denial or revocation of a permit to carry a concealed weapon or refusal of a renewal is subject to appeal to the district court up to the Supreme Court, which may consider and determine facts as well as law and which is not bound by any factual, legal, or other determination of the sheriff, 45-8-324.​

A concealed weapon permit from another state is valid in Montana if (45-8-329): 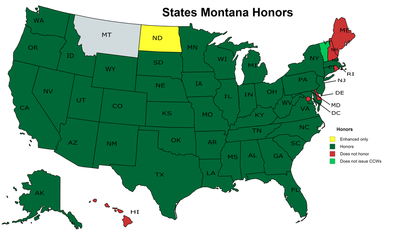 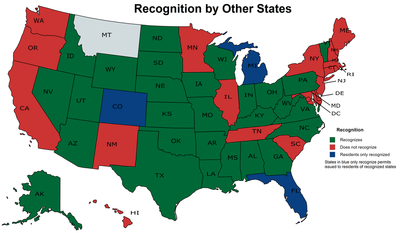 "Concealed weapon" means any weapon [...] that is wholly or partially covered by the clothing or wearing apparel of the person carrying or bearing the weapon [...] (45-8-315)

The following information regarding what defines concealed carry is provided for historical purposes as a permit is no longer required for those who may legally possess firearms. As far as carrying a firearm in a purse, bag, backpack or case, Montana law is not as specific as other states which do prohibit such carry. The Department of Justice's Firearms FAQ page provides the following unofficial opinion:

​If you have a CWP you may carry a gun in a purse or backpack.  If you do not have a CWP it could be considered a violation of the law for you to conceal a gun in a purse or backpack, since the law defines a concealed weapon as one that is “wholly or partially covered by the clothing or wearing apparel of the person carrying or bearing the weapon.”  Check with your local county sheriff or county attorney for more information.

Accidental concealment of an openly carried firearm, such as clothing falling over the gun, is not criminal, as the offense requires it to be done "purposely and knowingly." "Printing," where the imprint of your gun shows through your clothing, is not illegal anywhere in the United States.
Concealed carry is better than open carry because surprise will work to my advantage.
The idea behind this is that an openly carried weapon may make the carrier a primary target of the criminal/terrorist. The concealed carrier would blend in with the crowd, and then draw at when it was to their advantage.

Open carry and concealed carry each have their own unique advantages and disadvantages; neither is inherently superior to the other. Both methods complement each other and allow for flexibility in self-defense.
Open carry is not suicidal; attacks debunked
This does not constitute, nor should be implied as, legal advice. Always seek an attorney's advice and consult state and local laws yourself. User assumes all liability for use of the information provided here. Copyright 2022. Updated 6/2022.